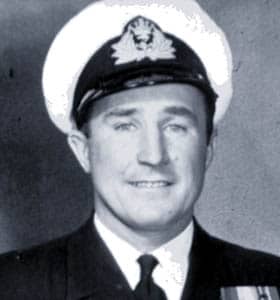 Lieutenant Joseph Dobbyn joined the New Zealand Division of the Royal Navy in 1933 as an assistant cook.  After completing basic training in HMS PHILOMEL he was posted to the cruiser HMS DIOMEDE which during his time onboard saw service in the Red Sea when the Italians invaded Abyssinia.  In early 1937, while in Britain, he joined the cruiser HMS ACHILLES for its commissioning and subsequent  journey to New Zealand, during which time while still in service with that ship he completed further cookery courses at HMAS CEREBUS in Australia.  By the beginning of the following year he was once again in HMS PHILOMEL where he remained until he joined the cruiser HMS LEANDER in October of 1938 staying onboard that ship during the early years of World War II.  In early 1940 he was once again ashore in HMS PHILOMEL and HMNZS TAMAKI, joining HMS ACHILLES once again in October 1942.  While onboard HMNZS ACHILLES the ship was attacked by Japanese aircraft in the Pacific.  Dobbyn completed his war service as chief cook of the cruiser HMNZS GAMBIA.  In late 1945 Dobbyn once again joined HMNZS ACHILLES for a period of one year during which time it went to Japan and the United Kingdom.  In late 1946 he joined the cruiser HMNZS BELLONA for a period of one year, eventually returning to New Zealand and to undergo commissioning.  From late 1947 Joseph Dobbyn was posted to the shore establishments HMNZS PHILOMEL, HMNZS TAMAKI and HMNZS IRIRANGI.

Joseph Dobbyn retired from the Royal New Zealand Navy in 1959 having attained the rank of Lieutenant.