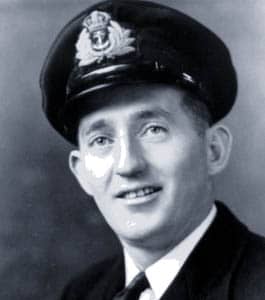 Lieutenant Edward Morrison joined the Royal New Zealand Volunteer Reserve in 1942 and immediately proceeded to the United Kingdom to train as a pilot in the Fleet Air Arm.  Morrison like most Fleet Air Arm candidates was trained in Britain at HMS ST VINCENT, HMS DAEDALUS and HMS KINGSTON in Jamaica. His initial operational posting was to Trinidad in the West Indies, piloting trainee observers and flying Albacores on armed patrols over various Caribbean shipping lanes.  In 1944 he converted to Barracudas, joining the light fleet aircraft carrier HMS VENERABLE for service in the Far East.

In the time after Victory Japan Day, Morrison joined the Pacific British Fleet, still onboard HMS VENERABLE which proceeded to Hong Kong to supplement the British “presence” in that territory.

Edward Morrison journeyed back to New Zealand and was discharged, Lieutenant in late 1945.