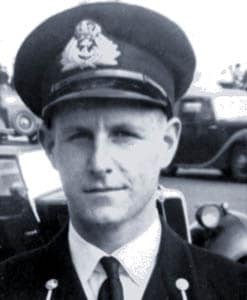 Captain Richard Lea joined the Royal New Zealand Navy in 1946 as an engineering cadet and was promptly sent to the United Kingdom for training.  After initial training at the Royal Naval College BRITANNIA, Dartmouth and at the Royal Naval Engineering College HMS THUNDERER at Manadon he was posted to the cruiser HMS BERMUDA where he gained his engineroom watchkeeping certificates.

In 1952 having completed specialist courses at the Royal Naval Engineering College, Lea returned to New Zealand and served in the cruisers HMNZS BELLONA and HMNZS BLACK PRINCE.  He was then posted to the frigate HMNZS PUKAKI as that ship’s engineering officer, then in 1956 to Naval Staff HMNZS WAKEFIELD, Wellington to assume the position of Assistant Director of Marine Engineering at Naval Staff Headquarters.

In late 1958 Lea travelled back to the United Kingdom and served as technical assistant during the commissioning of the frigates HMNZS OTAGO and HMNZS TARANAKI and on exchange at the Portsmouth naval dockyard.

He returned to New Zealand again in 1964 and served in the frigate HMNZS OTAGO as Engineering Officer and as Training Commander in HMNZS PHILOMEL.  1968 saw Lea posted once more to Naval Staff at HMNZS WAKEFIELD where he was Director of Engineering, followed by Engineering Manager of HMNZS Dockyard, Auckland in 1970.

Richard Lea’s final appointment was as Superintendent of the Dockyard in 1974 where he remained until his retirement from the RNZN in 1981 having attained the rank of Captain.