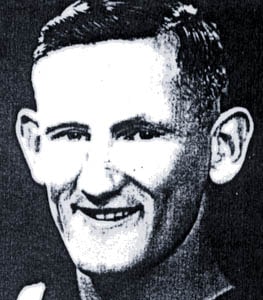 Leading Signalman Lawrence Luxton joined the Canterbury Division of the Royal Naval Volunteer Reserve in 1934.  He trained onboard the Volunteer Reserve Division training ship the Castle class trawler HMS WAKAKURA and the cruiser HMS DUNEDIN and had several cruises onboard the cruiser HMS ACHILLES, including a trip to Britain and back when that ship went “home” for a refit in 1938.

On the outbreak of World War II Luxton was serving in the Merchant Navy, and was called up for naval service in late 1939.  He spent time onboard an examination vessel in Lyttleton, New Zealand before being posted as the convoy commander’s signalman onboard the Shaw Savill passenger-ship DOMINION MONARCH which was at that time taking troops to the middle east.  In addition Luxton served at the port wireless transmission stations at North Head in Auckland and Godley Head in Christchurch.

Lawrence Luxton was discharged in February 1943 having attained the rank of Leading Signalman.