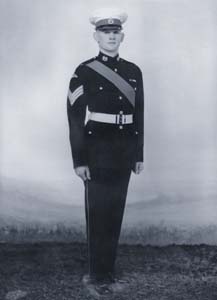 Royal Marine Sergeant Noel Harker joined the Royal Marines in early 1949. He completed his marine and gunnery training at various shore establishments including DEAL,  and at the Commando School at Bickley.

After his training he served onboard the cruiser HMS CEYLON during the Korean War.  In August 1951, marines from HMS CEYLON together with sailors from the frigate HMNZS ROTOITI took part on a raid on Go Rin Chi Ki Point.  Harker tells of his role in the raid and the death of Able Seaman Marchioni, New Zealand’s only casualty during this conflict.

Subsequently Harker spent some two years up in the Troodos Mountains in Cyprus, staying on in the marines until the resolution of the Suez Crisis.

Harker left the Royal Marines in 1957 having obtained the rank of Sergeant.  He subsequently immigrated to New Zealand and was co-owner of Alpha Caravans in Hamilton.