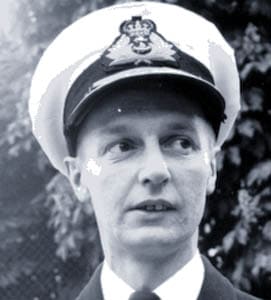 Commodore Maxson McDowell was in the first group of cadets to join the newly established Royal New Zealand Navy in 1941.  He travelled to Britain onboard the vessel GORGISTAN for training at DARTMOUTH as a Special Entry Cadet.  After training he was posted to the cruiser HMS BIRMINGHAM which was based in Cape Town, followed by time onboard the cruiser HMS HAWKINS in 1943.  On completion of Sub Lieutenants’ courses in 1944 he became navigator in the destroyer HMS WOLSEY and served out the remainder of World War II onboard the vessel STAVANGER assisting in the German surrender.

Upon his return to New Zealand in 1945 McDowell joined the cruisers HMNZS GAMBIA and latterly HMNZS BELLONA.  He specialised in navigation and served onboard various RNZN ships including the frigate HMNZS TAUPO which was based in Westport, New Zealand during the wharf strike, followed by a deployment to the Mediterranean.

In 1953 McDowell took command of the Bird class trawler HMNZS TUI, after which he spent time with the Royal Navy on exchange and ultimately took command of the frigate HMNZS OTAGO in 1960 during that ship’s first commission.  This sea time was followed by a period of staff appointments ashore including command of HMNZS PHILOMEL, a position on the staff of SEATO (South East Asia Treaty Organisation) in Bangkok and as Defence Advisor at the New Zealand High Commission in London.

Maxsom McDowell retired from the RNZN in 1975 having attained the rank of Commodore.