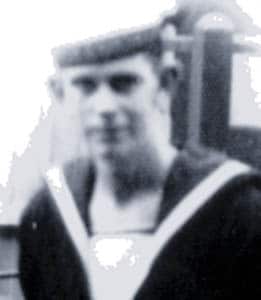 Able Seaman William Neville joined the Auckland Division of the Royal Navy Volunteer Reserve in August 1939, a mere few weeks before war was declared.  After rudimentary training ashore and onboard the minesweeper HMS WAKAKURA, Neville joined a draft of 249 which travelled onboard the passenger ship AQUITANIA to Britain.  Having arrived, the draft was broken up and Neville was sent to the training establishment HMS ST VINCENT for sea training. His first ship posting was to the sea-going auxiliary AA vessel HMS ALYNBANK which escorted coastal convoys on the east coast of Scotland, as these ships were often under attack from German aircraft based in Norway.

In one of those chances of fate Neville’s next posting was to the ill-fated cruiser HMS NEPTUNE, and if not for a piece of lost kit which saw him missing the ship, this oral history would not exist.  Subsequently he was sent to join the commissioning party of the minesweeping trawler HMNZS MOA which was about to commence her delivery voyage.

Once back in the southern hemisphere Neville qualified as an asdic operator and following service on the minesweeping trawler HMNZS INCHKEITH, he was posted to the Solomon Islands, to one of the two Fairmiles operating in the Guadalcanal area where he remained until the end of the war.

William Neville was discharged from the RNZN in September 1945 having achieved the rank of Able Seaman.