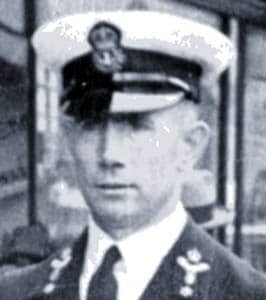 Mechanician 1st Class Stanley Parslow joined the New Zealand Division of the Royal Navy in 1928 as a Seaman Boy, proceeding to HMS PHILOMEL which at that time was the training and depot ship berthed at the Devonport Dockyard for the purposes of training.  After a year in HMS PHILOMEL Parslow was posted to the cruiser HMS DUNEDIN and while onboard experienced the Mau Mau uprising in Samoa and the devastating earthquake in Napier, New Zealand, both of which he describes in some detail.  He stayed in HMS DUNEDIN until 1937 when he spent a short period in the cruiser HMS ACHILLES before proceeding to Australia to undergo specialist mechanician training in the shore establishment HMAS CEREBUS.

On returning from Australia in August of 1939 Parslow joined the cruiser HMS LEANDER. While onboard he experienced the torpedoing of that ship in the Solomon Islands.  On his return to New Zealand in 1943 Parslow spent a short time in the minesweeper HMS NORA NIVEN before being posted as chief engineer to the minesweeper HMS KILLEGRAY in 1945 where he remained for a year.  The Dockyard tug HMS HIPI was Parslow’s final posting.

Stanley Parslow was discharged from the Royal New Zealand Navy in early 1947 having attained the rank of Mechanician 1st Class.