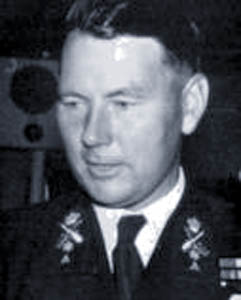 Chief Petty Officer Claude Mason-Riseborough joined the New Zealand Division of the Royal Navy as a Seaman Boy in 1935.  On completion of training he served in HMS ACHILLES where, apart from some courses ashore, he remained until 1943.  During the Battle of River Plate he was loading number five on the left gun in B turret.  This turret fired 173 six inch shells during the action, Mason-Riseborough describes his contribution to the sinking of the German battleship ADMIRAL GRAF SPEE. At the end of 1943 he was posted to the cruiser HMNZS GAMBIA and spent the last days of World War II off the south of Japan.  He was within two or three hundred miles of Nagasaki when the atom bomb was dropped on the city.

After the cessation in hostilities Mason-Riseborough served at the shore establishments HMNZS TAMAKI and HMNZS PHILOMEL and also spent several years onboard the cruiser HMNZS BELLONA.  At the beginning of 1951 he became the chief boatswain’s mate on the frigate HMNZS TAUPO and spent some time on the West Coast manning the coal mines in that area during the strike, which he speaks of in some detail.  HMNZS TAUPO then went to the Korean War and Mason-Riseborough describes patrols up there and in particular one action off Yang Do Island.

Claude Mason-Riseborough retired as a Chief Petty Officer in 1956, re-enlisting as a general service hand in 1965.   He spent eighteen years looking after the whalers, cutters and boats at the HMNZS TAMAKI boatyard at North Head in Devonport.  He retired once more in 1983.