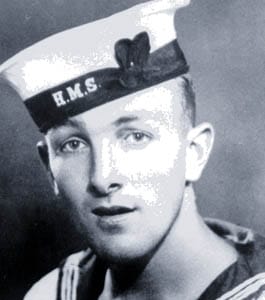 Able Seaman Lawrence Hurndell joined the RNZN in May 1941.  After training at HMS TAMAKI he was seconded to the Royal Navy in Singapore and after further training joined the Dragonfly River class gunboat HMS GRASSHOPPER.

HMS GRASSHOPPER took an active role in the defence and evacuation of Singapore, but was bombed and sunk in the final exodus.  Able Seaman Hurndell was wounded and after some time in Sumatra was captured by the Japanese and spent the remainder of World War II as a prisoner of war.

Able Seaman Hurndell and his comrades built roads and railways throughout Sumatra in the most extreme conditions.  This is a story of man’s inhumanity to man.

Lawrence Hurndell was discharged from the RNZN in October 1945 having attained the rank of Able Seaman.