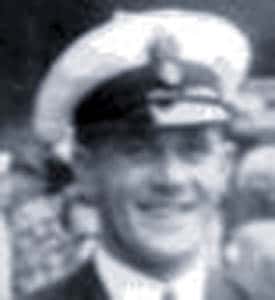 Lieutenant Keith Connew joined the New Zealand Division of the Royal Navy as a Seaman Boy in 1934.  After a year of basic training at HMS PHILOMEL, he joined the cruiser HMS DUNEDIN for a little over a year before being posted to the cruiser HMS ACHILLES in early 1937.  While onboard that ship Connew, by then an ordinary seaman saw action at the Battle of the River Plate and consequently was Mentioned in Despatches.  Apart from a brief time in the armed-merchant cruiser HMS MONOWAI he remained with HMS ACHILLES until early 1943 when he joined HMNZS GAMBIA which was based out of Ceylon, remaining onboard until the end of World War II.

Having joined the regulating branch in 1942, Connew was Master at Arms in HMNZS PHILOMEL at the time of the 1947 mutiny and provides some insight in to this incident.  Apart from a year in the cruiser HMNZS BELLONA, he was ashore at various establishments notably HMNZS PHILOMEL, HMNZS TAMAKI and HMNZS COOK in the Regulating Branch. In 1954 he became a recruiter for the Royal New Zealand Navy, a job he performed admirably for many years.

Keith Connew retired in August 1971 having attained the rank of Lieutenant.