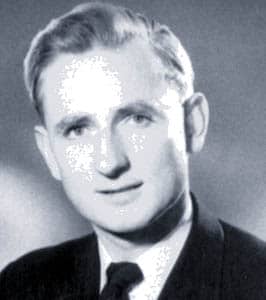 Lieutenant Commander David Barratt, a Royal Navy man from early 1945, was one of the many RN Officers who travelled to New Zealand in the formative years of the Royal New Zealand Navy.  He arrived as a young Lieutenant in 1951 and worked as an instructor for a year, before being posted as a Gunnery Officer to the frigate HMNZS HAWEA which had been earmarked for service in Korea during that country’s civil war.  The ship’s main operating area was near Paengyong Do Island on the west coast/38th parallel.  HMNZS HAWEA’s main task was inshore patrol, including bombardment of North Korean coastal artillery sites.  During the deployment the asdic onboard HMNZS HAWEA contacted what was thought to be a submarine, however after a long night of track and attack manoeuvres, it turned out to be a sunken Japanese tanker from World War II.  Barratt returned to the United Kingdom in early 1954 shortly after HMNZS HAWEA had completed her service in Korea, however in 1978 he moved to New Zealand permanently with his wife, an ex- Wren.  He joined the Royal New Zealand Navy serving on the Commodore’s staff at HMNZS PHILOMEL.  Barratt retired with the rank of Lieutenant Commander on 1 April 1984.

On 7 April 1984 David Barratt joined the staff of the Navy Museum as Historian and Director, where he remained until his retirement in May 1987.