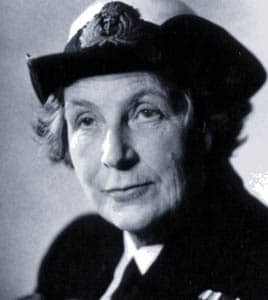 Superintendent of Wrens Mary Morten was in the second intake joining the Women’s Royal New Zealand Naval Service in early 1942.  She came from a background of service in the Girl Guide Movement where she had considerable experience in catering and supervising groups of young women.  Initially Morten was posted to Wellington and served at Worser Bay in the harbour control organisation that was located there.

In late 1942 Morten moved to Auckland as and joined the staff of the new wardroom in HMNZS PHILOMEL as a caterer and steward.  She was quickly promoted and within a year was a Petty Officer Wren in charge of quartering.  Morton lived for a time in Elizabeth House and then in the barracks at the top of Victoria Road, Devonport.  She describes a fire that broke out in the recreation room and the means by which it was bought under control.   Morton was promoted once more in 1944 to Fourth Officer and by the time she was discharged from the Royal New Zealand Navy in 1946 had attained the rank of Third Officer.

Mary Morten rejoined the WRENS in 1949 and was instrumental in re-establishing the branch at Elizabeth House.  She was promoted to Second Officer in June 1953 and became superintendent of WRENS in June 1955 for a period of two years before she retired from the service in December 1957.